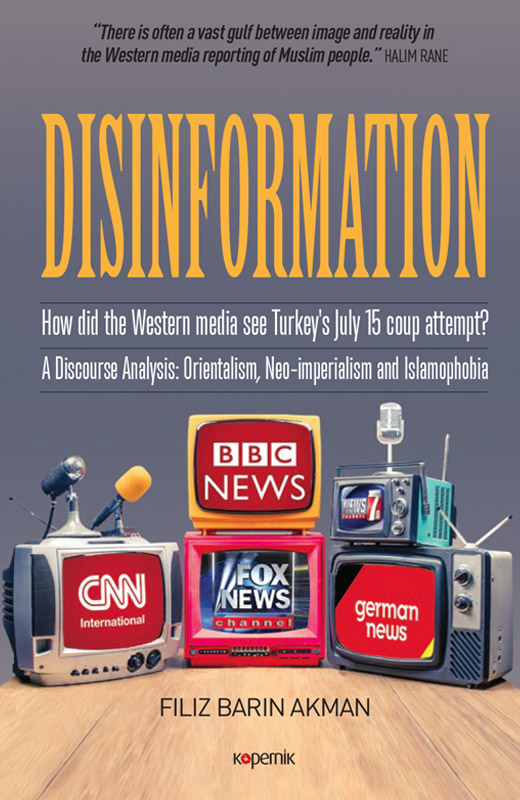 This book is an answer to this question: “What is the disinformation about Turkey’s coup attempt?”

The night of 15 July 2016 was a long one for Turkey. Many bizarre occurrences that no democratic country would like to experience happened on that fateful hot summer night. A military coup was in action: Some soldiers (FETÖ terrorists) declared military takeover on national TV, holding the trembling news anchorwoman at gun point; tanks rolled in the streets, bulldozing cars and civilians alike; helicopters rained down bullets on unsuspecting protestors; access to the Bosphorus bridge was blocked; military fighter jets began to fly eerily low; The Turkish Parliament was bombed with impunity. With the dawn it became apparent that perpetrators of the night’s bloody coup had destroyed many government buildings while they killed a total of 250 people and wounded more than 2000, some suffering serious injuries such as loss of limbs. What would the response of any country in the West be when encountered by such unacceptable atrocities? To resist bravely and sacrifice unselfishly? This is what the Turks did that night anyways.

The Turks’ unprecedented bravery and sacrifice in defense of democracy, freedom and country against a military intervention has been an exemplary act of civil defense but seldom recognized nor appreciated as such in the West. As this book shows this lack of solidarity with the Turkish people in their defiance against the coup, has emerged as a result of biased news coverage of the July 15 coup attempt in the mainstream Western media. The main objective of this detailed media analysis is therefore to inform the Western public about Turkish people’s view of July 15 coup attempt and ultimately forge a reconciliatory understanding between the peoples of the East and the West by pointing out the discrepancies between the Turks’ experiences and Western media’s representations of the same incident.